Parable of the Evil Farmers
9Now Jesus turned to the people again and told them this story: “A man planted a vineyard, leased it to tenant farmers, and moved to another country to live for several years. 10At the time of the grape harvest, he sent one of his servants to collect his share of the crop. But the farmers attacked the servant, beat him up, and sent him back empty-handed. 11So the owner sent another servant, but they also insulted him, beat him up, and sent him away empty-handed. 12A third man was sent, and they wounded him and chased him away.
13“‘What will I do?’ the owner asked himself. ‘I know! I’ll send my cherished son. Surely they will respect him.’
14“But when the tenant farmers saw his son, they said to each other, ‘Here comes the heir to this estate. Let’s kill him and get the estate for ourselves!’ 15So they dragged him out of the vineyard and murdered him.
“What do you suppose the owner of the vineyard will do to them?” Jesus asked. 16“I’ll tell you—he will come and kill those farmers and lease the vineyard to others.”
“How terrible that such a thing should ever happen,” his listeners protested.
17Jesus looked at them and said, “Then what does this Scripture mean?
‘The stone that the builders rejected
has now become the cornerstone.’
18Everyone who stumbles over that stone will be broken to pieces, and it will crush anyone it falls on.”
19The teachers of religious law and the leading priests wanted to arrest Jesus immediately because they realized he was telling the story against them—they were the wicked farmers. But they were afraid of the people’s reaction.

Taxes for Caesar
20Watching for their opportunity, the leaders sent spies pretending to be honest men. They tried to get Jesus to say something that could be reported to the Roman governor so he would arrest Jesus. 21“Teacher,” they said, “we know that you speak and teach what is right and are not influenced by what others think. You teach the way of God truthfully. 22Now tell us—is it right for us to pay taxes to Caesar or not?”
23He saw through their trickery and said, 24“Show me a Roman coin. Whose picture and title are stamped on it?”
“Caesar’s,” they replied.
25“Well then,” he said, “give to Caesar what belongs to Caesar, and give to God what belongs to God.”
26So they failed to trap him by what he said in front of the people. Instead, they were amazed by his answer, and they became silent. 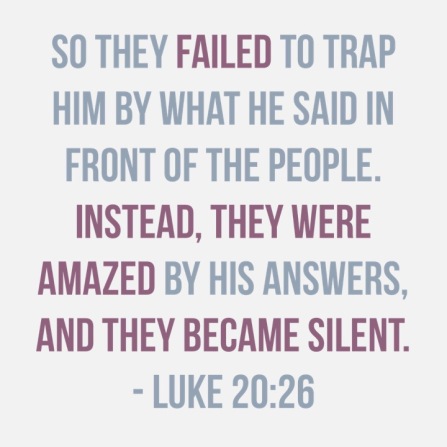 Did you start out today’s reading with the same thoughts as me? “Hey, we already read this! Did I open the wrong day??”

Nope. We’re covering the parable of the evil farmer again – this time from Luke’s perspective.

I won’t spend time going over that parable again since the story is very similar to what we read in the book of Mark just a few days ago.

Our reading for today goes a bit further beyond the parable of the evil farmer and into the conversation about taxes for Caesar.

The elders and high priests were beyond frustrated with Jesus and continually afraid of the people. So, they sent spies in to do their dirty work. The question about the taxes was not because they wanted to know the answer – and Jesus saw right through their motives. I mean really, did you catch the way they started their question? “Teacher,” they said, “we know that you speak and teach what is right and are not influenced by what others think. You teach the way of God truthfully. They were trying to butter him up and then pounce.

Then we see Jesus do what he does best – he gave them a perfect answer to their question that left them speechless! He tells them to pay Caesar what is owed to Caesar and to pay God what is owed to God.

The spies were amazed and became silent.

In your face, spies.

Before Jesus gave his answer about the taxes, he specifically asked them whose picture was on the coin. Caesar. And if the coin belongs to Caesar, then give Caesar whatever you owe him.

Now think about this: whose picture and title are stamped on us if we belong to Christ? Just like they owed Caesar what belongs to Caesar, we owe God what belongs to Him as our Creator. It’s not just tithes and offering, either. It is our time, it is a personal relationship and knowing Him like a best friend.

This life came from Him and it is owed to Him, indeed.

If we just got this one thing, our lives would be so completely different. What if each day depended on what we owe Him? What would that look like? How could God use us to impact the Kingdom if we are continually relying on Him for all that we are and not our own human abilities? I wanna live like that.